It's always great to see interesting uses of machine learning methods - and especially satisfying to see someone inspired by my book to apply the methods.

I was privileged to have an initial discussion with Dennis when he was planning on applying neural networks to the task of classifying water waveforms measured by radar from a satellite orbiting the Earth.

He went on to succeed and presented his work at a well respected conference. You can see his presentation slides here: 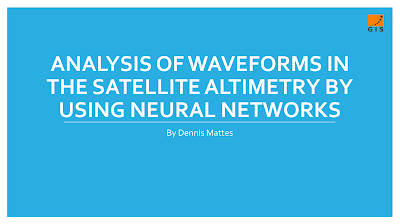 Satellite radar is used to measure the altitude (height) of surface features - which can be both land and water. 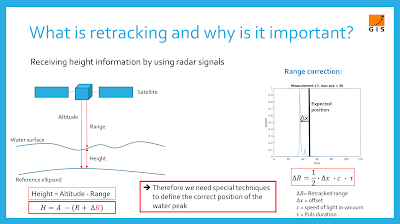 The signal needs to be interpreted and so that:

A neural network was trained to determine whether the signal was from land or water. 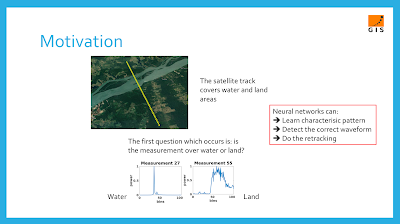 As you can see from the slide above, the signal signature is very different.

A neural network was very successful in detecting water. Detecting land was a little more challenging but this initial work showed great promise.

The next step is to calculate the height of the water waves. In-situ measurements were used as reference data to train a different neural network.

Part of the challenge for a neural network is that there are several peaks that can be detected during a measurement, and we want the highest peak of a wave. 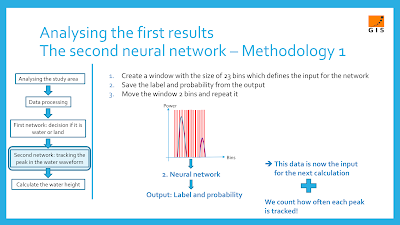 Tracking a peak as it moves allows us to have a higher level of confidence in labelling it a water wave peak.

The results are promising with some areas identified for further work.

The following shows how good the calculated water wave heights are based on automatic analysis by neural networks. 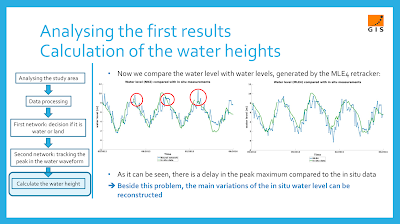 The first area for improvement is detecting land where the accuracy rate is lower than it is for water.

The second area for further work is to the resolve the "delay" visible in the calculated heights. This is not a major issue in this application as the height and shape are more important than the horizontal displacement / phase. 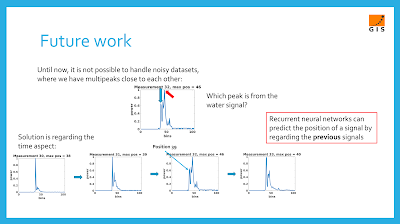 A good next challenge is to automate the detection of the correct peak, and neural network architectures that take into account a sequence of data - such as recurrent neural networks - can help in these scenarios.

Some of the code we wrote reads data from image files using a helper function scipy.misc.imread().

However, recently, users were notified that this function is deprecated:

We're encouraged to use the imageio.imread() function instead.

From imread() to imread()

The change is very easy. We first change the import statements which include the helper library.

To this:
import imageio

We then change the actual function which reads image data from files.

We can see the new function is used in a very similar way. We still provide the name of the image file we want to read into a array of data.

Previously we used flattern=True to convert the image pixels into a greyscale value, instead of having separate numbers for the red, green, blue and maybe alpha channels. We now use as_grey=True which does the same thing.

I thought we might have to mess about with inverting number ranges from 0-255 to 255-0 but it seems we don't need to.

The notebooks which use imread() have been updated on the main github repository.

This does mean the code is slightly different to that described in the book, but the change should be easy to understand until a new version of the book is released.

Posted by MYO NeuralNet at 08:10 No comments:

I've been really impressed with educative.io who took the content for Make Your Own Neural Network and developed a beautifully designed interactive online course. 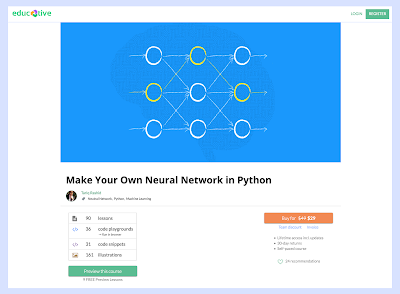 The course breaks the content down into digestible bite-size chunks, and the interactivity is really helpful to the process of learning through hands-on experimentation and play.

A very common question I get is how to save a neural network, and load it again later.


Why Save and Load?

There are two key scenarios when being able to save and load a neural network are useful.

What Do We Save?

If we save these matrices to a file, we can load them again later. That way we don't need to restart the training from the beginning.

The matrices wih and who are numpy arrays. Luckily the numpy library provides convenience functions for saving and load them.

The function to save a numpy array is numpy.save(filename, array). This will store array in filename. If we wanted to add a method to our neuralNetwork class, we could do it simply it like this:

If we want to stop the training we can issue n.save() in a notebook cell. We can then close down the notebook or even shut down the computer if we need to.

To load a numpy array we use array = numpy.load(filename). If we want to add a method to our neuralNetwork class, we should use the filenames we used to save the data.

If we come back to our training, we need to run the notebook up to the point just before training. That   means running the Python code that sets up the neural network class, and sets the various parameters like the number of input nodes, the data source filenames, etc.

We can then issue n.load() in a notebook cell to load the previously saved neural networks weights back into the neural network object n.

We've kept the approach simple here, in line with our approach to learning about and coding simple neural networks. That means there are some things our very simple network saving and loading code doesn't do.

Our simple code only saves and loads the two wih and who weights matrices. It doesn't do anything else. It doesn't check that the loaded data matches the desired size of neural network. We need to make sure that if we load a saved neural network, we continue to use it with the same parameters. For example, we can't train a network, pause, and continue with different settings for the number of nodes in each layer.

If we want to share our neural network, they need to also be running the same Python code. The data we're passing them isn't rich enough to be independent of any particular neural network code. Efforts to develop such an open inter-operable data standard have started, for example the Open Neural Network Exchange Format.

In some cases, with very large networks, the amount of data to be saved and loaded can be quite big. In my own experience from around 2016, the normal saving of bumpy arrays in this was didn't always work. I then fell back to a slightly more involved method to save and load data using the very mature HDF5 data format , popular in science and engineering.

The Anaconda Python distribution allows you to install the h5py package, which gives Python the ability to work with HDF5 data.

HDF5 data stores do more than the simple data saving and loading. They have the idea of a group or folder which can contain several data sets, such as numpy arrays. The data stores also keep account of data set names, and don't just blindly save data. For very large data sets, the data can be traverse and segmented on-disk without having to load it all into memory before subsets are taken.

You can explore more here: http://docs.h5py.org/en/latest/quick.html#quick